Anyone who has lived in Florida long enough knows that living in the Sunshine State comes with up-close and personal encounters with wildlife, whether that means ospreys, alligators, and geese, or yes: snakes. 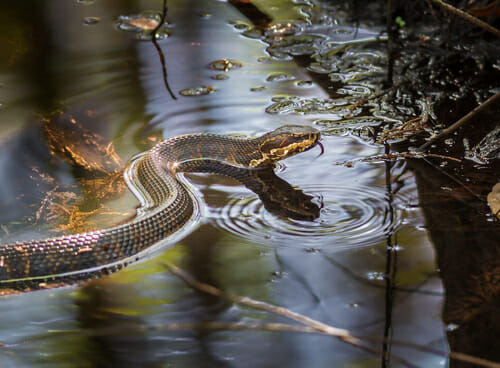 Most of the snakes that you’ll come across in your personal garden are harmless, but not all. This is why it is so important to learn about snakes before you encounter one. Letting a fear of snakes prevent you from learning about them and being prepared for an encounter is a dangerous mistake.

What to do when you see a snake

When a snake crosses your path, the very best thing to do is back away and observe. Snakes are frightened by people, and most of the time when a snake attacks a person it is because the snake felt threatened. Snakes by nature will try to avoid you at all costs. When you encounter one, chances are it is going to hurry away.

By standing back and watching it you’ll have a few advantages:

Killing a snake out of instinct is a bad idea for a few reasons. There are some snakes that are actually endangered, and killing one is unlawful and damaging to our wildlife conservation efforts. In addition, some snakes are helpful to your garden because they keep pests at bay. Snakes don’t eat from your garden, but they do eat the smaller critters who would.

Once you’ve taken the time to observe a snake, the next thing to do is identify it. You can do this online by using resources like the Florida Fish and Wildlife Conservation Commission or the University of Florida IFAS extension, both of which have tailored information concerning the types of snakes living in North Florida.

The most common type of snake found in Florida is the southern black racer, also known typically as the “black snake.” This is a harmless garden snake who won’t hurt you or your plants. Typically they are only a foot or two long, but can get as long as five feet as adults, and are going to be entirely black on their backside with white on their face, particularly their chin and throat. If you see a black snake, know that it is likely trying to get away from you and stand back for a moment while it goes its own way.

Another common snake is the flower pot snake, which is an incredibly small snake that looks like an oversized earthworm. Like the black racer it is entirely harmless. Other common Florida snakes include the garter snake, which has a checkerboard pattern on its back and the rat snake which has a bright orange color, as well as the rough green snake, who is bright green and will attempt to blend into plants rather than run away when you frighten it.

Remember, the very best thing you can do when you see a snake is to step away, have a good look at it and then immediately go inside and identify it. If you have your phone or camera on you, take a picture of the snake and bring it to your local wildlife extension office for assistance in identifying the snake.